Horses and a Cart: Recipes for a Good Year in Italy

While we usually recommend the off season for travel to Italy, there are some great reasons to go in Summer--and it's not just the weather. July happens to be the month my favorite two festivals in Italy are celebrated.

L'Ardia di San Costantino (in Sardo "Sa'Ardia) is held at the Sanctuary of Contantine just outside the little town of Sedilo in the province of Oristano. The dangerous horse race recalls Constantine's victory over Maxentious at the Mulvian Bridge in 312, during which Constantine is reported to have seen a flaming cross inscribed with the words "in this sign thou shall conquer".

Each year a person who has received some special dispensation from God is chosen by the local priest to play Constantine. He chooses his generals and arms them with flags; they are allowed to do just about anything with the flags they can think of, including bashing persuing riders so they can't pass Constantine in the race.

Constantine is a saint in Sardinia, but not in Italy.

Sardinians are top horsemen; many of the best are chosen to run in the much better known Palio di Siena. Many of them show up to see if they can outrace Constantine's stand-on.

They start on top of the hill and race downhill on a dirt and gravel path, with a great deal of luck passing through the narrow entrance gate shown below. 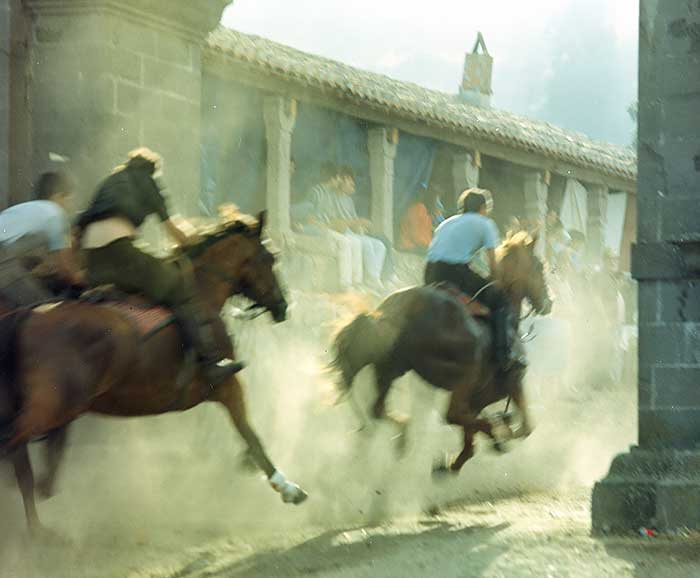 The race continues to the Sanctuary of Constantine, where the horses are blessed by the priest. Men shooting rifles keep the horses and the surging crowd separated. The pack circles the church seven times, then gallop off in a cloud of dust toward the fountain.

If "Constantine" wins by reaching the fountain first, it means a good year will be had by the residents of Sedilo.

But we're not done yet. After the July 6th evening race there will be food and drink. At some point the crowd will disperse. The riders will stay. And drink. The next morning, early, the race will be run again on a track strewn with beer cans and oily eel cones, this time for the locals.

On the second of July in Matera in Basilicata, "la la Città Sotterranea" or the underground city celebrates the Brown Madonna, protector of the city, in a rather spectacular way, as they have been doing for over 600 years. The 2016 festival will be the 627th.

There are several stories on how all this came about, but here's the official one:

"has its origins in a legend which tells of a beautiful, impoverished woman who asked a peasant, travelling by horse cart, for a lift into town. The peasant agreed, and at the entrance to the village the woman revealed herself to be the Madonna (Holy Virgin) and asked the peasant to deliver a message to the bishop of the city. The bishop, accompanied by a band of believers, then set out to greet the Madonna. Once they reached the place where she had been, they found only a statue on a Triumphal Carriage. The bishop ordered that the carriage should be taken to the cathedral, but the soldiers of the city, in the meantime, had been told to sequester it. The citizens then decided to destroy it in order for each of them to remain in possession of a part of it. The celebration of this legend begins at dawn with a procession of shepherds. After the procession of the Triumphal Carriage, escorted by knights, the festival culminates when the people destroys the Carriage itself at night. The destruction of the Carriage represents the citizens' hope for a prosperous harvest. Anyone who is able to take a piece of the Carriage away with him is considered to be lucky in the coming year." ~ July 2: The festival

The festival also tells of destruction and renewal, and the triumph of the young over the established order.

Like many "brown" or "black" Madonnas, the Madonna Bruna image in the Cathedral with brown until the restorers showed up and found that the brown color was entirely due to the build-up of candle smoke.

In any case, July 2nd starts with the procession of the shepherds, but the part most folks come to see is the cart, the "triumphal Chariot" that has taken an entire year to design and build. It will circle the Cathedral square three times. You will wonder what is going on. Then, surrounded by the local constabulary, young bucks burst out of the crowd to fight their way to the Chariot, where they rip it to shreds. Don't worry, it will be redesigned and rebuilt next year. Rebirth.

It is part of a continuous story, like sand paintings and flower carpets of the Italian Infiorate, the beauty is meant to be destroyed so that you don't cling to worldly things.

Unprepared, you will shake your head and make your way to your hotel, baffled by the scene of the beautiful cart being trashed. If a television is on in your hotel lobby, it might be tuned to the festival.

Don't make the effort to sleep, however. The late night pyrotecnics will likely make it impossible.