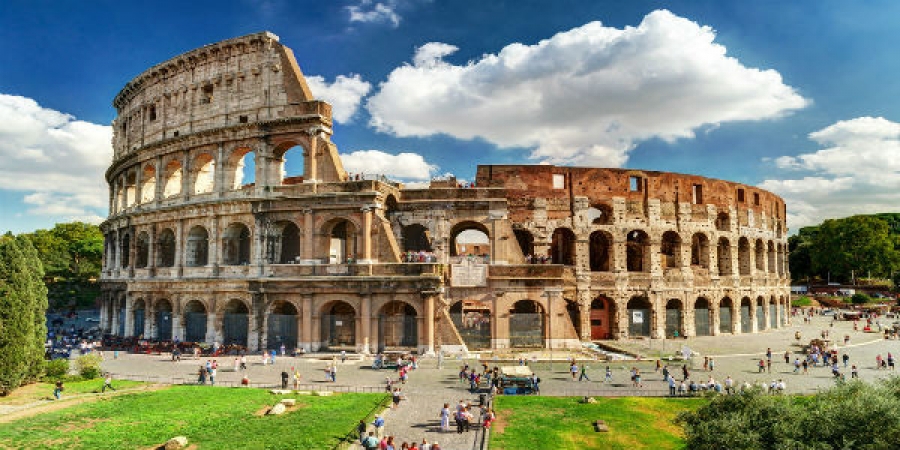 Climb to the top levels of the Colosseum for some of the best views of the ancient amphitheater from above.

Gain exclusive access to the Roman Colosseum's restricted top levels and experience a spectacular view of the Eternal City. Open to a limited number of visitors after four decades of closure, This tour is proud to offer skip the line tickets for the top tiers of the Colosseum. Learn about the significance of social class in ancient Rome, and where people of various status enjoyed events at the Colosseum. If you love to take photos, this is one of the best Rome tours for you. This three-hour tour includes:

- A maximum group size of only 15 people

Colosseum Third Level - Enter the Colosseum through the first level and climb up to the third level where you will have plenty of time to enjoy the views from the northwest side of the amphitheater, and out over the Roman Forum. The third tier was reserved for the plebeians, also known as the working classes. After you've taken plenty of photos, learn about the types of games that took place inside the Colosseum from your professional guide. Used for animal hunts, gladiator fights, mock sea battles and even public executions, this is a must-see attraction in Rome.

Colosseum Fourth and Fifth Levels - The section of seating on the fourth level sits almost above the emperor's "Imperial Box" on the first level. Close enough to the brutal action for blood splatter, emperors enjoyed the best views in the Colosseum. The fourth-tier seats were reserved for common women, while the fifth-tier seating was used by both common women and the poorest of the poor. These are the ancient equivalence of "nosebleed seats" in modern stadiums. However, today, the top levels of the Colosseum are one of the best places to take photos.

Learn about the concept of "bread and circuses", a practice used by emperors to prevent Roman citizens from rioting. In short, a well-fed and entertained population was less likely to rise in revolt against the aristocracy. Imagine if everyone who lived in a city enjoyed free access to sports events at the local stadium - would modern cities be more peaceful?

Ancient Roman Forum - This Colosseum tour includes Roman Forum tickets and a guided ancient Rome tour of the ruins inside. All our professional guides are trained as experts in both the Colosseum and Roman Forum. This area, also referred to as the "Ancient City", was once the location of downtown Ancient Rome. Visit some of the most famous Roman Forum buildings, including the Temple of Julius Caesar, Arch of Titus, the Roman Senate House and more.

After the tour concludes, feel free to explore the Palatine Hill on your own. Enjoy the views over Circus Maximus, relax in the Farnese Gardens or simply perch on an ancient piece of marble to enjoy the views. By the end of this Colosseum tour, you'll leave with a camera full of incredible pictures and a new appreciation for Roman life in the 1st-4th centuries.

The prices listed above are an estimate based on the daily exchange rate with the Euro. Due to the fluctuation in the Euro, the prices are subject to vary by up to 5% (usually a decrease, occasionally an increase). The precise price is confirmed upon booking following.

Please note: L&B Italian Tours have an on-call operator in Italy, in the event that anything changes or you have problems in Italy, you can contact us easily.

Inquire About this Trip