I like lakes. I also like fresh water. I live on the water in California. Small lakes are better than oceans or seas because the water is calmer. When the lake gets glassy and reflective there's no limits to the romantic notions the calm can spur.

That's my story and I'm sticking to it.

What's good about Italian lakes? Italian lakes can have medieval hamlets and castles built right up to the water. You can't say that about a lake in Iowa, can you?

While Italy's big lakes--Como, Garda, Maggiore--make fine destinations, there is a problem of scale. Like the Great Lakes, they overwhelm. Better to slide your kayak or canoe into Lago di Iseo and paddle gently.

If you hadn't heard of Christo and Jeanne-Claude's Floating Piers project, in which "100,000 square meters of shimmering yellow fabric, carried by a modular dock system of 220,000 high-density polyethylene cubes floating on the surface of the water" were installed at Iseo by the artists, you might be in the dark as to the location of this gem of a lake tucked between lakes Como and Garda. It happens to be my favorite of the Italian Lakes. It is, as the official site says, "The Romantic Choice".

The little lake contains Montisola, the largest lake island in all of Europe. You might see one or two of the island's three cars, owned by the priest, the doctor and the mayor.

Lago di Iseo is in the Franciacorta wine region. Romantic? Franciacorta sparkling wine is Italy's best sparkler, rivaling the most expensive of Champagne.

But that's not all. Drive north through the Oglio river valley into the Valcamonica and you'll come upon Italy's very first UNESCO World Heritage Site and one of the largest collection of prehistoric petroglyphs in the world. Not only that, but you'll be in an area of alpine walks peppered with villages that seem to have escaped modern times. 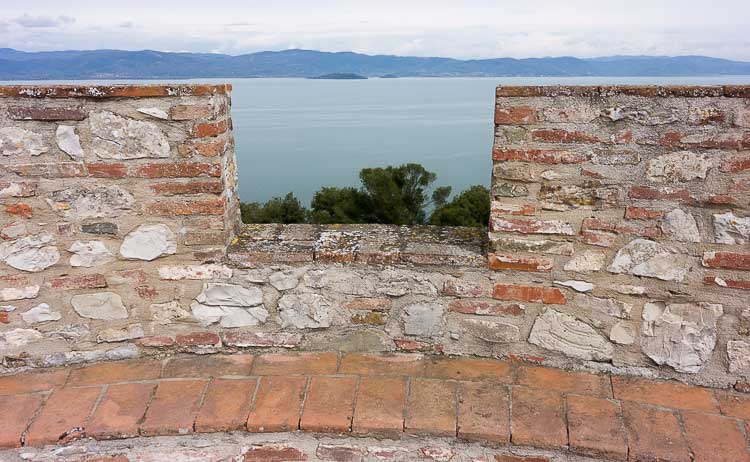 Ok, Lake Trasimeno is not tiny. Trasimeno happens to be Italy's largest non-Alpine lake but is fairly shallow. In 217 BC Hannibal brought his elephants and fought the Romans on the north shore of the lake in the second Punic War. Hannibal won. It's in Umbria, but close to the western boundary of Tuscany, near the wine region of Montepulciano, so the wines from the western side of the lake are very good (try Madrevite and see the Etruscan tomb).

Stay in the town of Castiglione del Lago if you wish to stand at the castle and look out onto the shimmering, shallow waters of the lake as you see above. Take the little passageway between the Palazzo della Corgna (see the frescos first!) and the 13th century Castello Del Leone if you don't mind narrow spaces. Castiglione was once on a small island linked to the mainland by a Roman dam, but is now on a penninsula that juts into the lake. 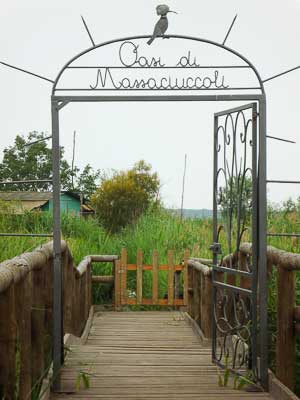 Ok, it's a pretty sure bet that you can't even pronouce this one unless you're fluent in the Italian Language. But any way you say it, the lake is famous. Yes, none other than composer Giacomo Antonio Domenico Michele Secondo Maria Puccini considered the lake a "paradise" and had a villa right on its shores, which you can visit today. You can also attend the Puccini festival in the outdoor theater on the lake, called the "Gran Teatro All'Aperto Giacomo Puccini."

Oh, but that's not all! You can head to the other side of the lake in a boat (or something) and come upon the Oasi LIPU Massaciuccoli. It's a bird watching sanctuary. You walk in the marshes on raised walkways to experience nature close up. If you're there early enough in the morning while the birds are feasting, there are blinds set up for you to watch or photograph from.

But even that's not all! There is a Roman villa complete with baths overlooking the lake just uphill from the marshes. Below the ruins of the villa are new excavations of Roman Massaciuccoli--and a small museum.

Find out more about Lake Massaciuccoli.

So these are a trio of my favorite lakes. Tell me yours in the comments if you are so inclined.

Amatrice and the Politics of the Big One
Massimo Bottura: The Skinny Chef You Might Trust a...