Who Cares if the Italian Truffle Tour You've Chosen is a Little Bit Faked? Take One Anyway.

First, let's get the bona fides out of the way. I am a veteran of countless truffle wars. I have seen lowly mutts paw the tender soils under trees with the exagerated vigor of army privates fearing the brig, a young man with a carved stick giving orders and encouraging them. When the dogs yap, and they will, the truffle man responds, raising an eyebrow before wrenching the troops back from the trenches with fearless arms, guaranteed him by his constitution. He bends, he plucks, he beams; an ugly, warted, dusty mass rolling between his fingers like a beguiling cats-eye weilded by a nemesis tempting you to risk everything in your marble bag.

The audience that has funded this exhibition is generally wowed by the action and applauds lightly so as not to startle the gods of good favor. The dogs release their pent-up anxiety by bounding thorugh the soft grass, yapping for some heavy petting. The young man will give the truffle to the cutest young woman so that pictures can be taken. All is well in the truffle world. 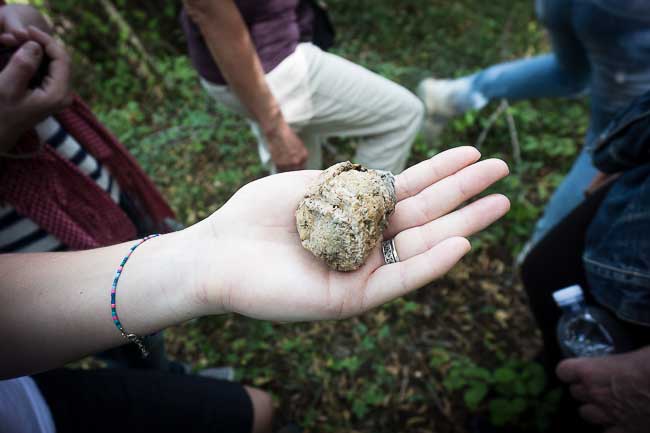 If you were paying attention you might notice that I have used the word "exhibition" in the previous sentence. The man with the big stick is likely to have planted the truffle you have observed close up. He is quite clever. He cannot reveal his most productive soils or he would be out of work. The other truffle hunters watch him like hawks. He watches back. Oh, the fun, the intrique, the need to deceive...

Let's get down to it: he is likely to have planted that truffle to teach a brash, young dog the ropes of finding it.

Now you feel I am saving you from being ripped off, don't you? After all, we vacationing humans value "real". We come to the silly boot to have experiences that aren't fake. (We also value gritty, although quite a bit less than we value "real" if it involves walking in hot sun with ticks.)

So now you know. But let me surprise you: go anyway. I mean, you get some fresh air, some excercise, a bit of sun-- you get to pet the dogs, remember. People like that.

And you get to eat truffles. Yes, near the end of the tour you generally end up at a place where you will consume this rare tuber over something steaming hot and fairly neutral in taste.

In fact you might be surprised when the waiter comes up behind you, leans over your plate and begins shredding the carefully re-cleaned truffle "we've found" over your steaming ravioli. Soon everything will be smelling like sex. Good sex. Dirty sex. The hot sex of your dreams. 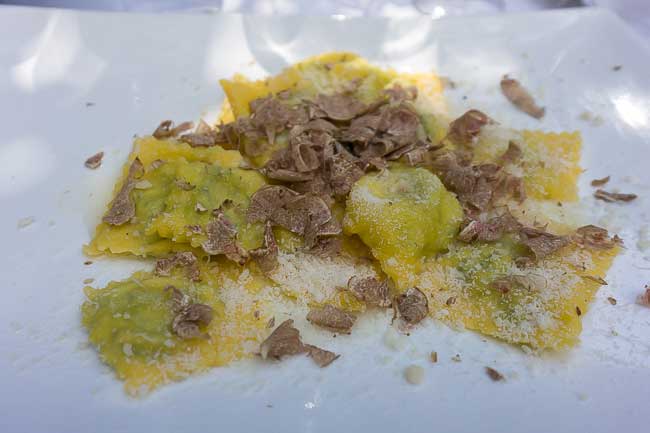 Researchers in West Germany have found that truffles contain large quantities of a substance also synthesized in the testes of boars. In the boars it is secreted into their saliva when they court females. The Germans report that the substance's musklike scent, "emanating from the saliva foam, is smelled by the sow and prompts her standing reflex."

The chemical is twice as abundant in truffles as in the blood plasma of boars. Furthermore, it and related steroids are produced in the testes of human males and secreted by their armpit sweat glands. It can also be detected in the urine of women. ~ TRUFFLES: WHY PIGS CAN SNIFF THEM OUT

I do not always wax poetic over boar testes or saliva foam, even if they sound like the exotic ingredients in the amuse buche they might serve in that restuarant none of us can afford. But still, the point of the whole excercise is to let these oders waft over your vacationing body. The sub plot is that your neighbors back in Cabbot Cove aren't having the dish you're having and you're bound to become absolutely giddy over the one-upmanship thing. I mean you've had a glorious experience that started with a little amusement, a little uglyness wrenched by obedient dogs from the forest soil that will become the focus of an expensive gourmet lunch, which you've taken with a bit of wine in the company of other folks quivering in anticipation of sexy tuber delights.

Thus I cut to the chase. Go. Just go. Don't be put off by the exhibition, the saliva foam, or the dirt on your shoes. You will discover the Italian countryside. You will eat like you've never eaten before. You'll have done something so weird it's wonderful. You have a story. Go with it.

Here's a start: Seven Delicious Days of Truffles and Wine in Piedmont

Massimo Bottura: The Skinny Chef You Might Trust a...
Fabriano: It's All About That Paper