Have you seen a performance in a Roman Theater? Yes, there are many Roman theaters in Europe and Africa, and many are being put back into service. What better thing to do with them but to stuff them with people and charge them for seeing a performance?

Many moons ago Bill, Martha and I took a break from our archaeological survey of Sardinian Nuraghi to relax in a bed and breakfast in the town of Pula. Pula is the modern city; the nearby ancient city of Nora sits pretty at the foot of the promontory of the Cape of Pula, where you couldn't screw up a landing no matter how ancient or battered your boat. Nora lies on the coast south of Cagliari. It's the ideal place to spend a few days. You have a white sand beach, shallow for the kids, an ancient city founded by the Phoenicians between the 9th and 89th centuries BC, the medieval Church of Sant'Efisio, and a modern town to explore, all in a small area surrounded by clean, sparkling blue waters.

And, we found out, you could see a play in the ancient Roman Theater on the waterfront. Our Italian was shaky, sure, but the play? Our Town by Thornton Wilder. Surely we would have an inkling of what was going on. 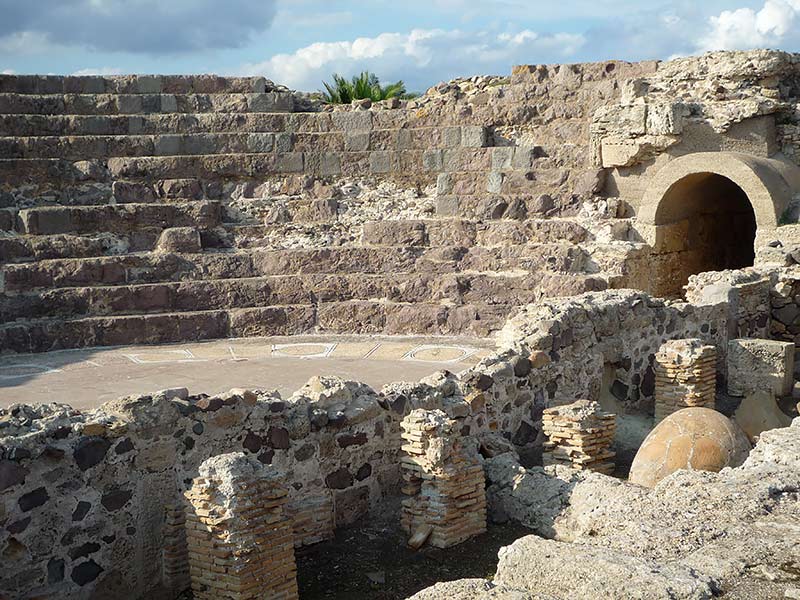 So we decided to go early for tickets, crowding around the forlorn little window like beggars awaiting a cup of gruel. We edged forward as one on the theory that three (dunder) heads were better than one to decifer what the ticket guy would tell us in the Italian language. Tickets were offered. Money changed hands. So far so good. Then, with much urging, Bill asked the man if people might bring a bottle of wine and sip it while enjoying the sunset and the sea and the old-fashioned Americans speaking Italian on the stage. He said something like, "Oh, sure, everyone does it!"

Heartened by the joy that comes when you discover a local custom you might not only be able to practice but to excell in, we rushed out to a little store we saw on our drive in, returning with a bottle of hearty Sardinian red and bag stuffed with a few nibbles. We clambered over the crumbling stairs and found some "seats." Peering around at the babbling crowd, we can report with some certainty that nobody else brings a drop of wine to these things. They didn't seem to mind, however, so off came the cork. What they did bring was seat cushions. I have never admitted this when I had a glass of wine in my hand and other people were likely to go without, but they were the smart ones.

The theater was said to have three vomitoriums. In my head I looked around. What if the wine was bad? Best to have a place to practice another ancient Roman custom out of the view of the general public. Just in case.

Of course, this isn't the function of a vomitorium at all, despite what your fifth grade teacher (Mr. Schmidt, I am referring to you!) might have told you about those hearty eat-and-purge Romans. Let's get the terminology right; a vomitorium is a passage situated below or behind a tier of seats in an amphitheatre or a stadium, through which big crowds can exit rapidly. That's right, it's a big tunnel that spews people out. It is an action, not a place.

So now you know. You are prepared to go to a Roman theater and see Opera, jazz, or Our Town. And you should. The sea breezes, the wine, the torrent of words or musical notes, the nagging ache in your backside...

Teatro di Marcello. Also in Rome, the theater started by Julius Caesar and finished by Augustus in 17 BC hosts summer classical music concerts.

Arena di Verona. A fabulous historic setting for opera is the Roman Arena of Verona, a theatrical venue well set up for a cultural evening. Bars and restaurants are just outside. See what's playing.

Roman Theater, Fiesole. A short distance from Florence, the Roman Theater at Fiesole is home to Estate Fiesolana, Fiesole's Summer. The theater was the first ancient theater in Italy to present classical tragedy in April of 1911 with a performance of Oedipus Rex.

Spoleto, Teatro Romano. This Roman Theater built in the 1st century AD is used for concerts and dance performances during the annual Spoleto Festival.

Should You Go to Italian Language School?
Sand and Sardinia