Why? People have gotten in the habit of stealing sand from Sardinian beaches. A non-beach enthusiast like me might take that as a sign that the beach people are so enamored with the sand on Sardinian beaches that they frequently run off with it, and thus I can't go wrong sending you to a choice Sardinian beach. So, later on in this article, I will.

If you haven't learned of Sardinia's sand thieves, perhaps you have failed to read the following loopy sentence from the lead in a recent article:

It became unwittingly notorious for Silvio Berlusconi's 'bunga bunga' sex parties, but the holiday island of Sardinia is now having to endure a fresh indignity - tourists are stealing silky white sand from its beaches as a souvenir. ~ Sand and deliver - Sardinians indignant over tourists stealing sand from beaches as souvenirs

Around five tonnes of sand was intercepted last summer at Cagliari airport alone and a similar quantity has been confiscated so far this year.

Five tons! That's just what they found. And it's not like summer is over right now.

Sand isn't the lightest substance you can lug around you know. Yet people fill liter and a half water bottles full of it and put it in their luggage! Yes, while non-beach people are busy before their vacation taking a file to their metal belt buckles to lighten them up a few grams, beach people are sneering at their "pack light" bretheren while planning on lugging all this wave-worn quartz around.

Why shouldn't I take the beach sand? It's worthless, right?

Given the apparent demand, I'm not sure you can say that the weathered pebbles are worthless. I will, however, issue a general warning in the form of a sad story.

One day some archaeologists were to visit our dig house in Sardinia. The professors arrived a bit long-faced. This was odd, because they were on this spectacular island and their students were in awe of their talents. What could go wrong?

It turns out the students were all in jail. Every day they were strip searched. Then they were mercifully let go, deported to America.

What had they done? They had visited a cave and thought their professors might like to examine the spectacular stalagmites rising from the floor. So they discretely broke a few off a few samples. An eagle-eyed resident spotted them and reported the theft of this accumulation of material deposited on the floor from ceiling drippings. End of story. They won't be back. In another 100,000 years the stalagmites might grow back. Time will tell.

Where Should I go for Good Italian Sand not to Take Home?

Is Arutas beach. The sand at this Sinis Peninsula beach  is made up of small and round grains of quartz, ranging in color from pink to light green, as you can see in the picture below. Given the right conditions, this sand sparkles in the light. Unfortunately we were there in early spring, so the light wasn't exactly strong and the beach had just a few people milling about, none of whom were about to take off their clothes. Head for one of the small bays for some glaringly white rice-grain sand. 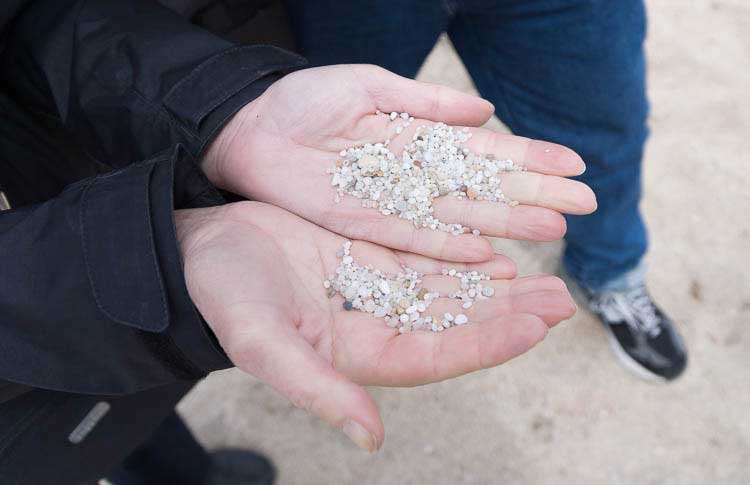 Better yet, head for Trattoria Da Artilio to be restored. Let yourself be surrounded by happy folks anticipating a fine Sunday lunch. Get the antipasti misti di mare and watch as plate after plastic plate of the freshest seafood you'll ever let slide down your gullet arrives at your table. It should run you around 13 euro. Then have a fish (13 euro) or a pasta (11-13 euro). Don't forget some house white wine (or the island's beer: Ichnusa) and you're good to go. 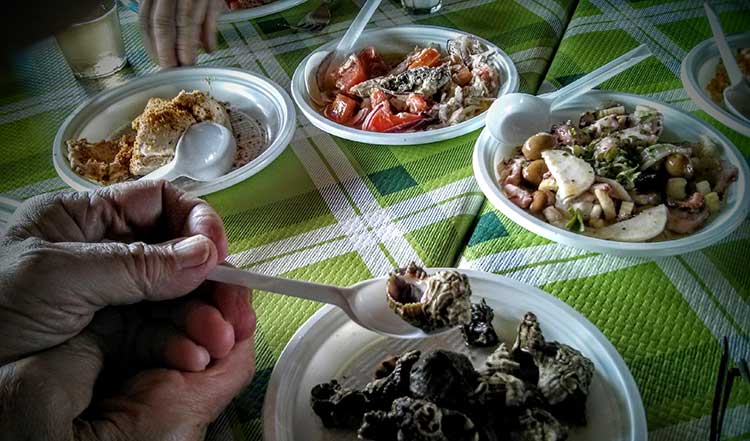 2000 Year old Italian Venues for Opera, Theater an...
Getting High Over Tuscany