What to Eat in Sardinia

Hardly anyone considers the island of Sardinia a gourmet destination. That said, the food is generally hearty and wholesome, and if you ignore the gargantuan portions you'll likely encounter (generosity is a virtue in Sardinia), you'll come away with the feeling you've eaten extraordinarily well, despite the simplicity of the dishes.

Before the Meal: Antipasti

Sardinia has an antipasto tradition like Puglia and very similar to where I've put down roots in Italy, La Lunigiana. In any of these three places you might sit down and tell the waiter you'd like antipasto and he's off to the races. Platters start coming. They never seem to stop. "Small plates" don't exist. Let's take a look at what the four of us were served at a Agriturismo Casa Atza in the village of Bauladu. 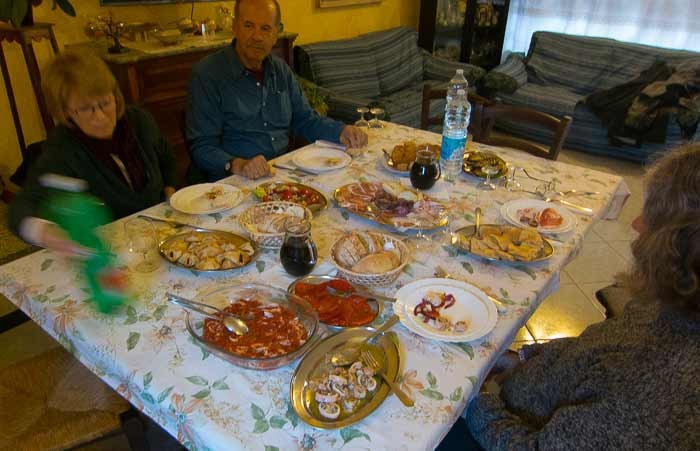 Which brings us to our fist aside. This is food of a type that people have eaten for a long time, especially for a splurge or a wedding. It's not chef food. It's close to the earth. Agriturismi (farm stays) in Sardinia are a little different than they are on the mainland. the family running Caza Atza raises cattle, they don't just noodle around with a few olive trees and call themselves a "farm". Every morning in the spring cheese is made. Every morning in spring cheese has to be made. This is kilometer zero food like you don't get in the US any more--and is even hard to find on the Italian mainland.

What I'm saying here is that you need to get yourself a bed in a Sardinian Agriturismo if you really want to get intimate with what you eat. There are many of them.

Sardinia, like other Italian regions, has its unique pasta shapes, from the ubiquitous gnocchetti Sardi to the complicated twin braids of lorighittas. But the iconic pasta is fregola.

Fregola is made by combining semolina flour and a bit of water, which is worked until little pellets of pasta can be formed. It's then dried and toasted to add some complexity. It is often served with a light tomato sauce and clams as in the picture below. 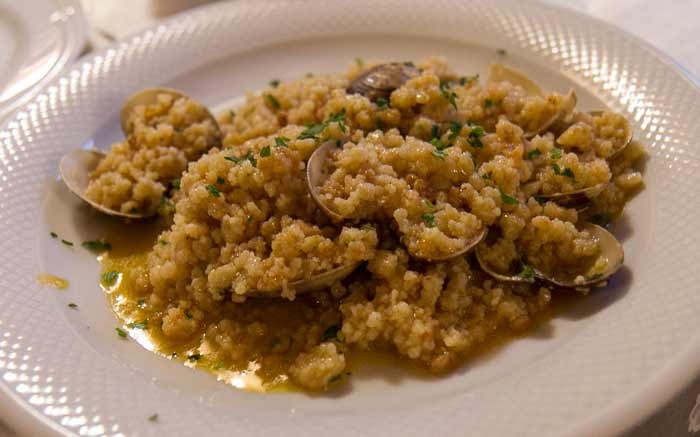 The one iconic Sardinia dish I can't wait to have placed in front of me is Maialino Sardo, sometimes called "maialetto". In Sardo it's "porceddu". In any case, the suckling pig used must weigh less than 6 kilos. It's best roasted slowly over a wood fire--the traditional way is to skewer the whole pig so it can rotate over the coals--but oven roasting doesn't diminish the flavor much. It is cooked and served with mirto branches. I haven't had a "bad" version yet.

Maialino Sardo is best with Sardinia's treatment of the grenache grape, Cannonau. 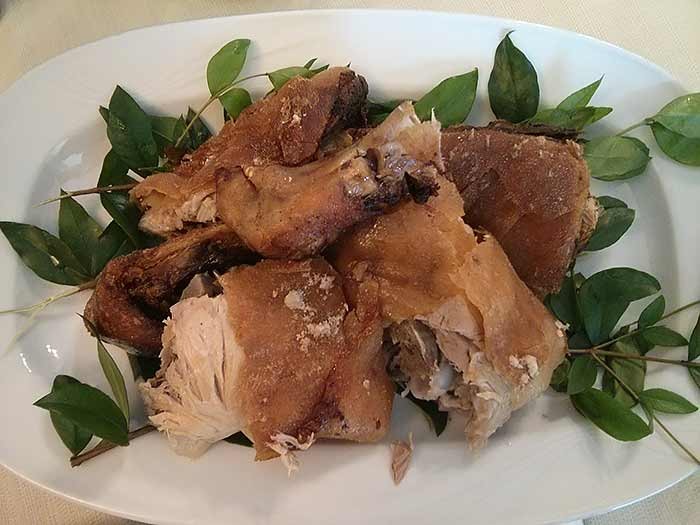 A Land of Bread and Honey

Bread is a particularly complex subject in Sardinia. A symbol of Sardinia is always found in the bread basket the waiter places on the table, thin shards of crisp bread lend the basket an artistic flare. This is Pane Carasau, sometimes called carta di musica, or music paper, because it looks like parchment. It starts like a flat bread like a large pita cooked in a wood oven. After it puffs up, the bread is removed and the two sides separated and returned to crisp in the oven.

With it you can make a traditional primo piatto called pane frattau in which pieces of broth-soaked pane carasau is layered and sauced like lasagna and an egg is cooked on top as in the picture below. 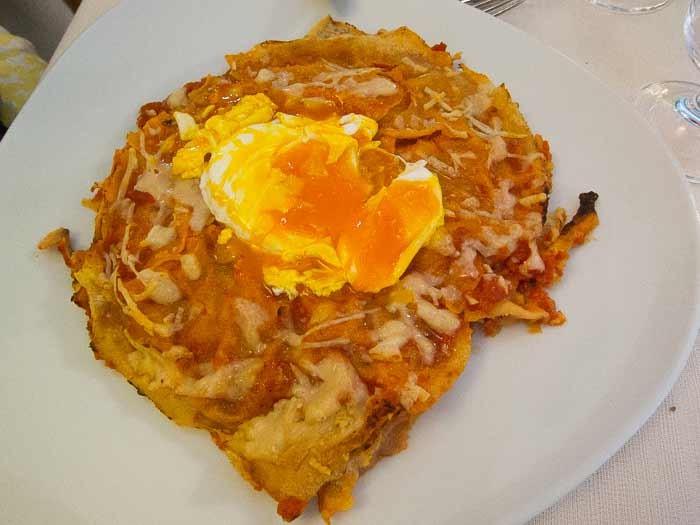 And no, the colors in the picture haven't been jacked up to make the egg look unrealistically orange. They come like that in Sardinia--and the flavor is as intense as the color.

We often snack on Pane Carasau warmed in the oven and drizzled with good olive oil and topped with a bit of salt.

You can also melt cheese on top. A spectacular dish having but three components is warmed casizolu cheese on pane carasau dribbled with Sardinia's vaunted bitter honey Amaro di Corbezzolo. From a mere three components you get textural crunch with the richness of raw milk cheese balanced by the bitter and sweet of the honey. 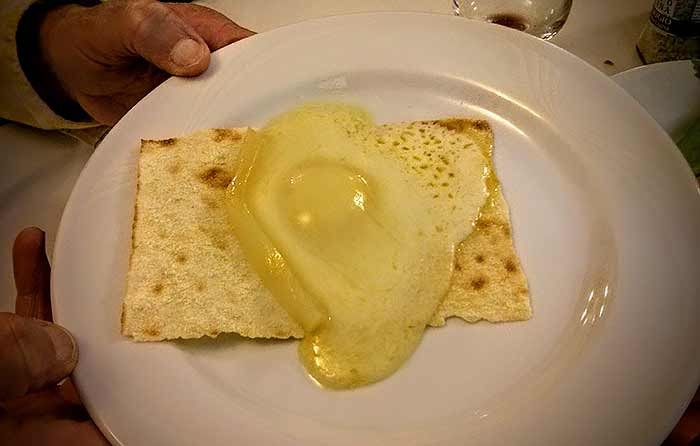 This is the essence of Sardinian food. It's about the ingredients, not fancy sauces or an abundance of foreign herbs.

I feel full just reading what I've written so far. Suffice it to say that you'll encounter many sweet things to have after a meal if you have room, but there are a couple of special ones you won't get anywhere else that I'd like to mention. One is the Torta di Sapa, a cake made from a big dose of sapa di Fico d'India, the concentrated juice of the prickly pear, a cactus you see all over the island, usually planted to form the boundaries of sheep paths. Near the village of Bauladu, sapa has been made for a long time, and is the principle ingredient in the cake you see below. The color is entirely from the sapa. In the background on the right are the cookies called papassini, flavored with star anice, a surprising ingredient that shows up in a number of Italian dolci.

And then you're done.

I hope you've enjoyed this little excursion into the foods of Sardinia. There are many ways to work off the calories in Sardinia.

Roman Splendor Outside the Walls
Why You Should Go to Sardinia